If you are a Canadian Sports fan, a soccer fan, or just love this beautiful country, next month is going to be awesome!  I haven’t been THIS excited for a month of soccer since my trip to Brazil for the World cup in 2014.

Next month there will be 2 major tournaments (one for the Women, one for the Men):

The Women’s World Cup and the CONCACAF Gold Cup.

The Women’s World Cup probably doesn’t need an introduction, but it is a showcase of the best Women’s teams on the planet, facing off to be World Champions.  The US are the current champions, and currently ranked # 1 in the world, so they are clearly the favourites going into the tournament.  That said, there are a few teams that could give them a run for their money – and yes – Canada IS one of them!

France (who will be hosting the tournament) have a great team, as do Germany, Japan, England, Sweden, Canada and the Netherlands.  Australia also has arguably the current World’s best player in Sam Kerr.

I’ll be wearing my Christine Sinclair jersey & obviously be rooting for the Canadians to win it all (which they have a realistic shot of doing). 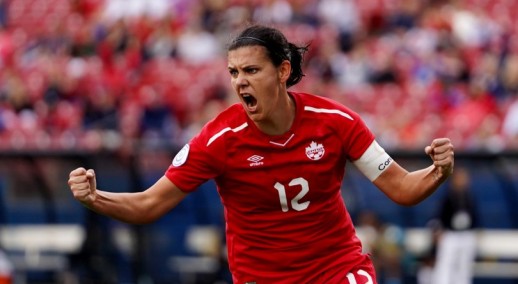 Christine Sinclair:  This is a no-brainer. The best player to ever play for Canada, and still our biggest goal threat! The only knock against her is her age – but even at the age of 35, she continues to lead her club and country (while picking up a lot of points along the way).  She has 3 goals in her last 3 club games, and has scored 12 times in the last 19 games for Canada.  Add to the fact she only needs 3 goals to tie the all time record – I think she will be PLENTY motivated to break the record in this tournament.

Janine Becky & Jordyn Huitema.  Luckily for Canada, Sinclair isn’t the only threat to score.  Becky (who plays for Man City) has already scored 25 goals for Canada in 56 games, and the 18 year old Huitema (who recently signed with PSG) already has 6 goals for Canada.  I don’t expect Huitema to start most games, but she should be an impact player off the bench for sure.  In the past, if teams could shut down Sinclair, they could beat us – now they have a lot more to worry about.

Jessie Fleming:  I cannot believe she is 21 years old already.  I’ve been watching her play for the National team since she was 15, and I absolutely LOVE the way she plays.  Her style reminds me of my favourite player of all time (Bergkamp).  She can control the whole flow of the offence with the ball at her feet, she will draw players to her and then send an amazing thru ball, but she can also score. Here is a little taste of her skillset:  Jessie Fleming Highlights

Ashley Lawrence: Going into the last Women’s World Cup I didn’t know much about Ashley Lawrence, but she quickly became one of my favourite players to watch.  I’ve since been able to watch a bunch of other games, and she continues to impress.  She is able to get up the field, and has insanely good offensive instincts, and an amazing cross – but what impresses me most, is her ability to track back.  She will be all the way up the field creating offence, and somehow, if the other team counters – she is the first one back.  She also plays her club football for PSG.

Those are my players to watch (and I didn’t even mention Kadeisha Buchanan, Deanne Rose or Nichelle Prince, or our hometown hero Desiree Scott).  There are so many other great players on this team – I think this team has more depth than any other I’ve seen (much like the Men’s team).  I cannot wait!  Canada was drawn into a group with: New Zealand, Cameroon & The Netherlands.  In a tournament like this, all the games are important, and all the games will be exciting, but if you can only watch one – you wont want to miss Canada/Netherlands.

June 20 VS Netherlands (They are my dark horse team to win the whole thing – they have 3 of the Worlds Best players).

For those who aren’t too familiar with the Women’s game, or just like good soccer, here are a few other players to keep an eye on from other countries(you won’t be disappointed).

I’m hoping to get my Canada Men’s team preview for the Gold Cup posted soon too!  In the meantime you can check out my earlier post about the Mens team HERE