A few days ago, I got a phone call telling me I won a trip to St Louis to go see the Winnipeg Jets play the Blues in game 4 of the Stanley Cup Playoffs.  The trip included a little spending cash, 2 nights hotel, 2 tickets to the game and airfare for 2!  This was a contest the Jets put on for their season ticket holders.

Although it was short notice – it was obviously not hard to find a friend to join me.  Prior to taking off, I started a thread on the ST. LOUIS REDDIT page.  Since I was only going to be there for 2 nights, I wanted to have a decent idea of where we should go, what we should see, and where I could find some good bourbon!  The fine people of reddit did not disappoint, within a few hours I had a full list of suggestions, and although I wasn’t able to get to EVERY place I wanted to (we were in St Louis for a total of like 36 hours) we did get to a surprising amount of places.

We stayed right downtown for the whole trip, and luckily for us, everything we needed to get to was only a few miles away.  The weather was beautiful (25 degrees and sunny) and the city was amazing.  My only complaint from the entire trip, is that (at least downtown) most bars and restaurants don’t open until 4, and stop serving food by 11).

Our first flight down was delayed, so we didn’t get in until late Monday night, almost everything was closed (for food) but we were able to find one sports bar by our hotel (the Over/Under).  We had about 15 minutes to order until the kitchen closed.  The food was decent, and the beer selection was pretty good as well.  Nothing to write home about, but we were starving and they were still open!  My first beer of the night was from a recommended local brewery: Absence of Light Peanut Butter Chocolate Milk Stout by 4 hands brewing. It was really delicious.  I’d get that one again for sure.  I also had a “Dale’s Pale Ale” which was just okay.  I had been up since 6 AM with the kids, and could barely keep my eyes open, so I went to bed pretty early.  My friend stayed out for a couple hours, and ended up checking out the Arch at night, and then headed down to the Casino where he won a bit of cash.

Tuesday we woke up fairly early (for us), and headed out for breakfast/brunch.  We found a place close to our hotel, and checked the reviews online.  It was called Rooster.  We both got the “slinger” which was basically eggs, sausage and potatoes on a piece of toast and smothered in gravy.  The potatoes had a nice kick to them, and it was delicious (and very filling).  It tasted a lot better than it looks… 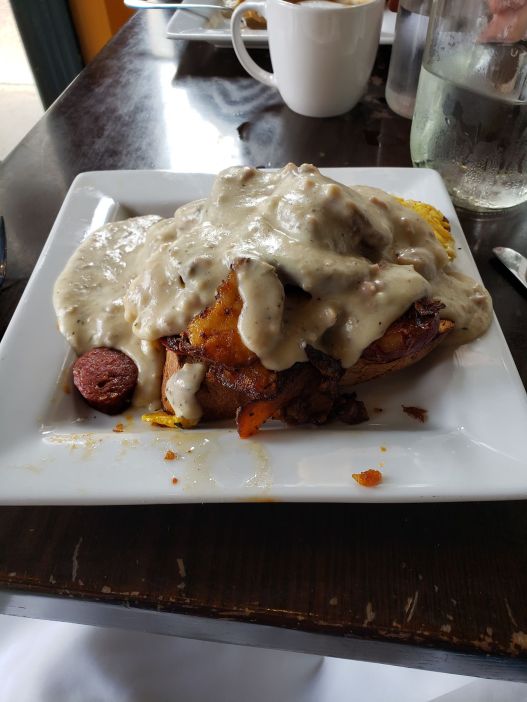 After breakfast, we headed to City Museum.  This place cannot really be described – you have to see it to believe it.  It is a huge old building, (used to be a shoe factory/warehouse I believe).  It’s been converted into a:

We didn’t have enough time to see everything, and not I feel like I NEED to go back to St Louis with the kids just to take them here!  Here is the wiki page for a better idea of this place:  https://en.wikipedia.org/wiki/City_Museum

After the Museum, we wanted to go down and check out the Gateway Arch.  I saw it as we drove in from the airport at night, and I thought…meh..that’s kind of cool I guess….but once you get up close to it, you realise just how magnificent it is.  As usual my pictures won’t do it justice, (another reason to come back with the family, so my wife can take some professional pics). 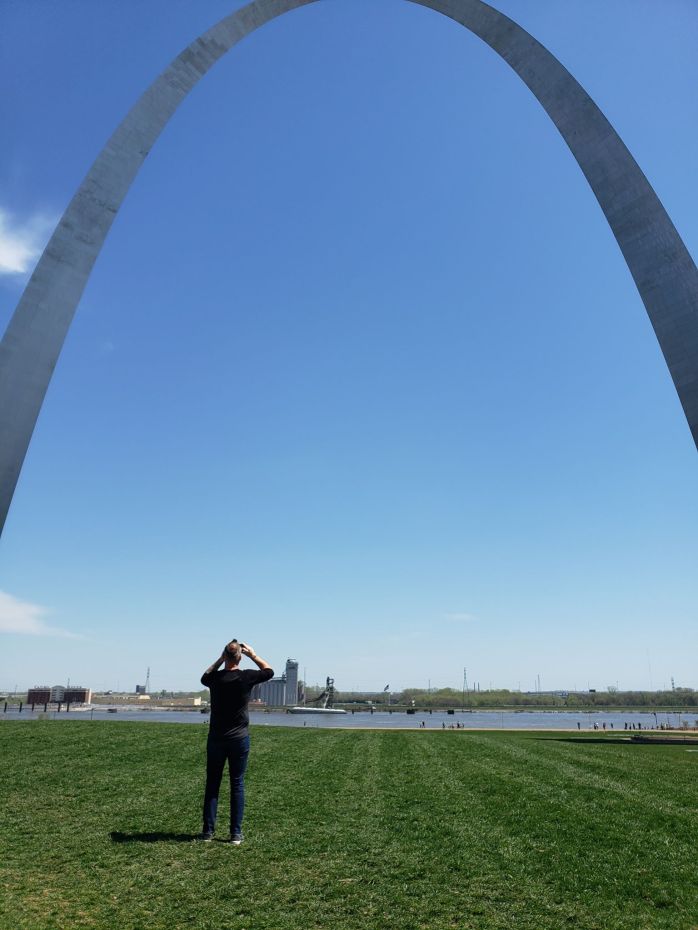 After checking out the Gateway Arch, and a quick stop to the Casino (so I could lose my obligatory $100 playing roulette) we headed to the Broadway Oyster bar.  This is another place, i’d definitely like to come back to during the evening, and catch a band.  We sat in the outside bar which reminded me a lot of the New Orleans bars I saw on the show Treme.  We knew we couldn’t stay too long, so we just ordered an appetizer (Crab dip) and a couple of drinks.  Since the place reminded me of a New Orleans bar – I had to start with a Sazerac (pic below) and I finished with a delicious Pimm’s cup!

Another thing I have to mention, which is probably not even worth mentioning to most people – but I found amazing (being from Winnipeg) was the ride sharing scooters.  There are basically hundreds(thousands maybe) of scooters that you can jump on and unlock with your phone/app to get around.  They charge you by the minute, but its super cheap.  My longest ride was about 8 minutes, which cost about 3 dollars.  We walked, or scooted everywhere during our trip, and I spent a grand total of like 13 dollars.  It was also my first time whipping around on an electric scooter which was super fun.

Our next stop was for dinner, and we headed to The Midwestern; a place that had been highly recommended on reddit for both it’s BBQ and Bourbon.  It did not disappoint.  I was also able to cross off a bucket list item at this bar (having a sip of some Pappy Van Winkle).  My buddy & travelling companion Benji was nice enough to drop $75 USD on a pour of Pappy for me.  It was absolutely delightful, and although I’m sure a lot of it was just in my head because of all the hype, it really was delicious.  That said, It’s definitely not worth $100 Canadian for a single pour.  I’d gladly take 6 pours of Blanton’s for the same price!

The food was really good as well.  We ordered a platter so that we could try a bit of everything.  The platter included:

It was all real good, but the ribs and brisket were my favourite!  We were both burping up BBQ all night, and it just kept reminding us how good the food was…hah 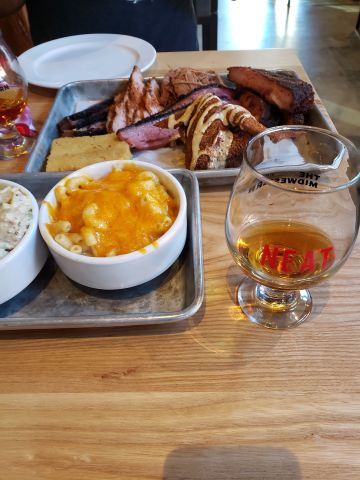 While we were at the Midwestern, we started noticing a lot of people coming in wearing their Blues Jersey’s.  Every time one would walk by our table, I’d lightly whisper to them
“Go Jets Go!”.  They would always smile and say something like “right on” or “go blues!”  I thought this was odd- why weren’t they booing me…Or worse? I assumed maybe they thought I was saying “Go Blues Go”.  More on this later….

After dinner we headed to the Hilton rooftop/360 bar (another reddit suggestion).  The views of the city and downtown were amazing.  I wish I had taken more pictures up there.  You could see the Arch, the Baseball stadium, the river, and the rest of downtown.  We also met Patrik Laine’s family up there as well!  Here is (one of) the views from the 360 bar: 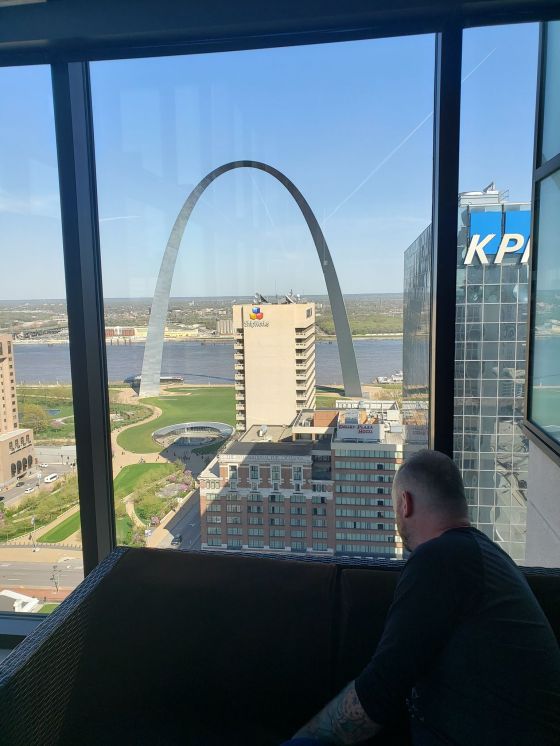 While we were there, we both ordered a Black Cherry Old Fashioned (which was really good), wandered around to do a full 360 view of the city, and then finally realised we had to go back to the hotel to grab our Jersey’s and head to the game!

We picked up our tickets at the box office, and quickly went to check out our seats.  Section 109, 10th row, between the blue line and the goal line…Very nice 🙂

We ran into a few other (not many) Jet’s fans and did the obligatory high five’s and handshakes.  We did a lap around the arena to check it out, and then went down to watch the Jets warm up right by the glass/bench.

The arena was really nice, it reminded us both a lot of Bell MTS Place – just slightly bigger, and a MUCH better beer selection.

The game itself was pretty much everything we could have asked for.  The Blues scored first, so we got to hear the home crowd erupt, and cheer….then in the 3rd period we tied it up (goal was scored right in front of us).  The Laine family was sitting right in front of us for the game as well, so it was fun being able to cheer with them.  The game went to Overtime and we got to erupt in Cheers with the few Jets fans around us as we won the game to tie up the series!

Throughout the entire game, the Blues fans were coming up and asking us how we liked the city, and being unbelievable friendly….like almost scary friendly.  During the intermission, right before overtime we were chatting with some Blues fans.  We also happened to be in line in front of Patrik Laine’s dad, and they kept telling us how much they hated Laine (probably because he scored 5 goals in one game against them).   I told them the guy right behind us was Laine’s dad…they didn’t care.  They told him they didn’t like his son, and then bought us a round of beers (but didn’t buy one for Laine’s dad)…haha

I cannot stress enough, how nice the Blues fans were to us, even after the game, a bunch came over, shook our hands, congratulated us, and said things like “anyone but Nashville” and “great game tonight”.  Seriously, the worst thing that happened to us, was a girl whispered “booo” as she past by us in the concourse.

Here is a view from our seats prior to the National Anthem.

P.S – The anthem singer in St Louis is awesome too! 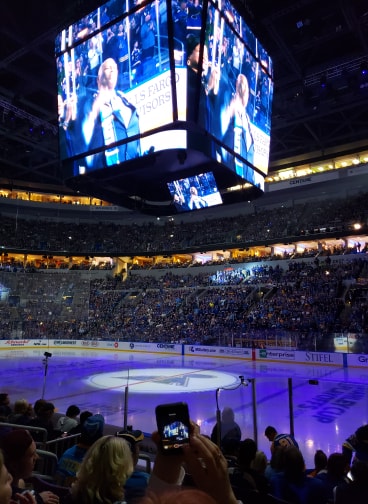 St Louis is a beautiful city, with awesome people.  My only regret is that we didn’t have more time.  I definitely want to come back in a few years when the kids are a bit older so they can experience City Museum.  The downtown area was extremely clean and well kept.  Every single person we met was an absolute gem, and the Jets won!  What a great 2 nights.  Stay classy St Louis.  Until we meet again!

← NHL Playoff Predictions. Go Jets Go!
I couldn’t do this again if I tried… →