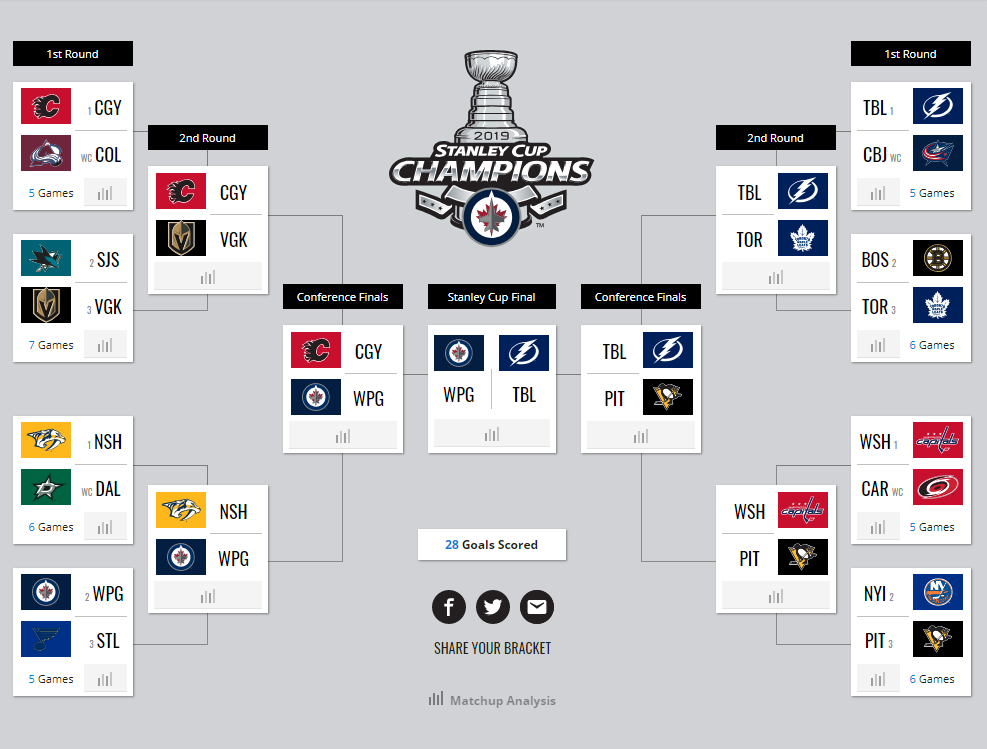 NHL Playoff Hockey Is Back!

The NHL regular season is behind us. Everything that was accomplished since October means nothing.  There are 16 teams left, and each one of them is just 16 wins away from hoisting the Cup!

I decided to take a stab at predicting each round (I may be slightly biased).

I have all 3 Canadian teams making it out of round 1.

As long as their goal-tending is even AVERAGE – Calgary should be able to overpower Colorado.  Calgary has too good of a defence and too much firepower up front to bow out in round 1.  Colorado has an amazing first line – but after that – their team is average at best.

San Jose vs Vegas should be a fun series to watch.  Burns & Karlsson will give Vegas a good fight – but I expect Fleury will come through and backstop his team to another playoff series win.

I have both Nashville & Winnipeg winning, however it wouldn’t surprise me if both get knocked out in the first round.  Since just before Christmas, both these teams have really started sucking major ass.  At the start of the season, these 2 were both expected to be Stanley Cup Favourites – but oh how the mighty have fallen.  That said, I think both of them scrape by their first round matchups and make it through so we can see an epic rematch from last year.

Jets in 5 (more on the Jets Below)

Tampa should dominate Columbus – which will be hilarious considering Columbus sacrificed their future for a deep playoff run this year.  Plus who doesn’t like seeing Tortorella losing his mind.

Even though I think Barry Trotz should win Coach of the year- I think Crosby, Malkin & Kessel are just too damn good.  I expect an early exit for the Islanders.

The champs from last year have a decent match up. It will be the experienced Caps against the “bunch of Jerks”.  Although I would LOVE to see the Hurricane’s upset the Capitals..I just don’t see it happening.

Toronto Vs Boston.  This is the round 1 Matchup on the East I am most looking forward to.  This one can go either way – I’ve always hated the leafs, but I’m actually rooting for them.  They’ve come along way, and have some players that are so much fun to watch (Tavares & Marner in particular).

Why the The Jets Will Win The Stanley Cup

Okay…Obviously I chose with my heart probably a bit more than my brain…but as my father always says…YOU GOTTA BELIEVE!

Lately, I haven’t been too excited about the Jet’s chances – they have been playing like shit since Christmas.  That said, there are a few reasons for optimism:

Pretty sure I enjoy "snack time" more than the kids....
Finally killed this bottle last night with some friends over and a bonfire while discussing politics, covid, capitalism and humanity. It felt good to see people in person again and engage in adult conversations (or as adult as we like to believe we are).